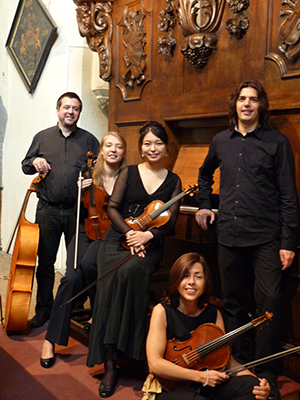 >> THE HILDEBRANDT CONSORT, named after the organ builder made famous by J. S. Bach, Zacharias Hildebrandt, was founded by its artistic director, Wouter Dekoninck. The ensemble specialises in the interpretation of repertoire and transcriptions for organ and baroque orchestra. Like no other, it has a true understanding of the chemistry of metamorphoses, in the manner of the old masters themselves. These passionate musicians transform violin concerti into organ concerti, keyboard suites into orchestral suites (with or without solo organ), preludes into fugues for baroque orchestra (and solo organ) and bring out the full colour of organ masses in transcriptions for baroque orchestra with vocal ensemble. Among the group's much loved and still running programs are ‘The Art of Transcription’ and ‘The Spirit of Handel’. The world premiere of the ‘Grosse Messe (1739) für Bach und Luther’, a transcription of Bach's ‘Dritter Teil der Clavierübung’ by Wouter Dekoninck, is planned for the 2017 Luther year, but the ensemble's followers will already get a sneak peek during this coming season as part of the ‘Bach in Leuven’ concert series. The Hildebrandt Consort has been a part of ‘Bach in Leuven’ since its creation and is thus its ensemble in residence.

>> WOUTER DEKONINCK regularly performs throughout Belgium and abroad as organist, harpsichordist and improviser, at both concerts and various international festivals. As the head organist of the historical Penceler Organ (1714) of St. Gertrude's Church in Leuven, he also founded the Hildebrandt Consort, the International St. Gertrude's Organ Festival (Leuven) and has worked tirelessly to contribute to the creation of ‘Bach in Leuven’. Various vocal and instrumental ensembles vie for his artistry as soloist and basso continuo.  His transcriptions and those for organ and baroque orchestra in particular form an exceptional, widely acclaimed repertoire.  Masterfully inspired from a thorough study of the compositional style of the original composer, his new works delight both musicians and public alike as a challenging, unknown, refreshing and fascinating repertoire.